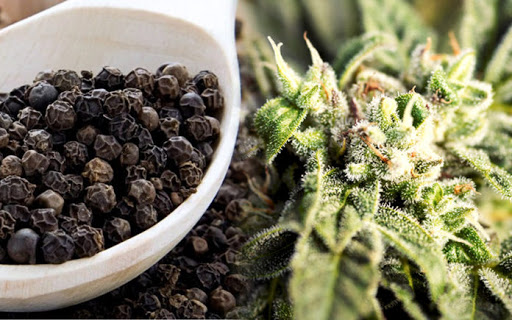 Caryophyllene is Found naturally in rosemary, green veggies, and oregano, this depression-fighting terpene has quite a peppery overtone and is typically found in black pepper and cloves. Adding a spicy tone to many strains. Caryophyllene is found in high levels in many strains of the Cookies family—Platinum GSC, GSC, Cookies and Cream, and Candyland (Platinum Cookies x Grandaddy Purple). What makes caryophyllene an intriguing terpene is its relationship with our endocannabinoid system, particularly, its ability to bind to CB2 receptors. Because of this, it comes with a host of potential medical benefits. Shown to have antioxidant and anti-inflammatory properties, and to be a possible therapy for treating inflammatory bowel disease.

Research has even found that caryophyllene may be able to treat anxiety and depression. Current studies are hoping to unveil even more of the therapeutic potential behind caryophyllene, including research indicating that it may help with lifespan longevity by reducing gene stress.

Caryophyllene is most well-known for its anti-inflammatory effects. This is because the terpene binds to CB2 receptors, the parts of our bodies’ endocannabinoid systems responsible for regulating inflammation.

Yet inflammation regulation is only one of several natural healing processes Caryophyllene can activate by binding to CB2 receptors.

We won’t get too deep into the science here, but this chemical reaction can help with:

Weight loss: As it does when combined with humulene, beta-caryophyllene(BCP) binds to CB2 receptors to suppress appetite in doses of 10 to 200 mg.

Cancer: BCP also “significantly increases the anticancere activity” of humulene, which inhibits tumor growth by up to 69 percent alone but up to 90 percent with Caryophyllene 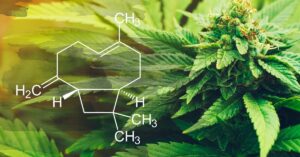 Alcoholism: Studies on mice suggest that CB2 receptors contribute to alcohol dependence and sensitivity. Working alongside them, Caryophyllene can mediate alcohol intake.

Anxiety and depression: CB2 receptors also contribute to the symptoms of mood disorders, research suggests, and can improve them alongside Caryophyllene .

Longevity: In worms, Caryophyllene has been found not only to modulate stress but to increase lifespan by up to 22 percent.

Brain health: By reducing neuroinflammation and increasing antioxidant levels in the brain, Caryophyllene can reduce seizures, swelling, and brain damage after a stroke. By improving blood flow to the brain, it can improve vascular dementia. And by activating CB2 receptors (which prevent dopamine loss), Caryophyllene can even help prevent Alzheimer’s and Parkinson’s 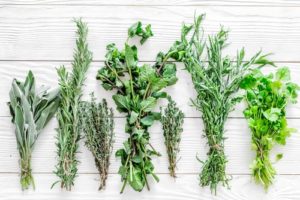 Inflammation and brain aging. There are numerous inflammatory diseases that affect the digestive tract. Colitis is one such disease where inflammation of the intestines causes pain, diarrhea, abdominal cramping, and even increases risk for cancer. In mice that were experimentally given colitis, treatment with caryophyllene helped by decreasing inflammation in the colon.

The activation of CB2 receptors by caryophyllene certainly plays a role in its anti-pain effects, but it also contributes to its ability to protect the body and brain from disease. For instance, brain inflammation plays a substantial role in the onset and progression of Alzheimer’s disease. In a mouse model of Alzheimer’s disease, caryophyllene activated CB2 and PPAR-γ receptors and reduced hallmark features of Alzheimer’s such as the accumulation of brain plaques. These actions also protect against the cognitive decline that characterizes this model of disease.

Pain: The data suggest that, in many cases, caryophyllene can provide pain relief. In one study, scientists injected mice with caryophyllene and found that they experienced less pain than those treated with the control solution. Furthermore, caryophyllene enhanced the pain-reducing strength of low-dose morphine. This could be one reason why those using prescription opioids from pain are often able to decrease their dose of opioids when they begin using medical cannabis.

These are only a few of at least 21 human health benefits of this extraordinary terpene. Safe to say it’s an all-rounder in medical cannabis.

strains of cannabis. Widely available and safe to use in many ways, this dietary cannabinoid has a unique way of affecting the endocannabinoid system that can result in a long list of powerful benefits.

caryophyllene has a lower boiling point than other cannabinoids do, so researchers recommend consuming it in ways other than smoking—and if vaping, pay close attention to the temperature whenever possible.